You are here: Home / Earned Media / Dream of Venice in Interior Design

When Stanley Abercrombie featured Dream of Venice Architecture in Interior Design magazine’s Books section,
his opening salvo was “A dream of a book.”

Those who award the IPPY’s agree, as Dream of Venice Architecture has won a 2017 Silver  “IPPY” Award. Established in 1996 as the first awards program open exclusively to independents, the Independent Publisher Awards receive 5,000 international entries. “Recognizing Excellence in Independent Publishing,” the IPPY Awards showcase the best books from throughout North America and the English-speaking world. The book is also among the finalists for a Foreword INDIES Book of the Year Award, which honor the best books from independent publishers. Finalists are chosen from over 2,250 individual entries who represent the best books from non-Big 5 publishers. 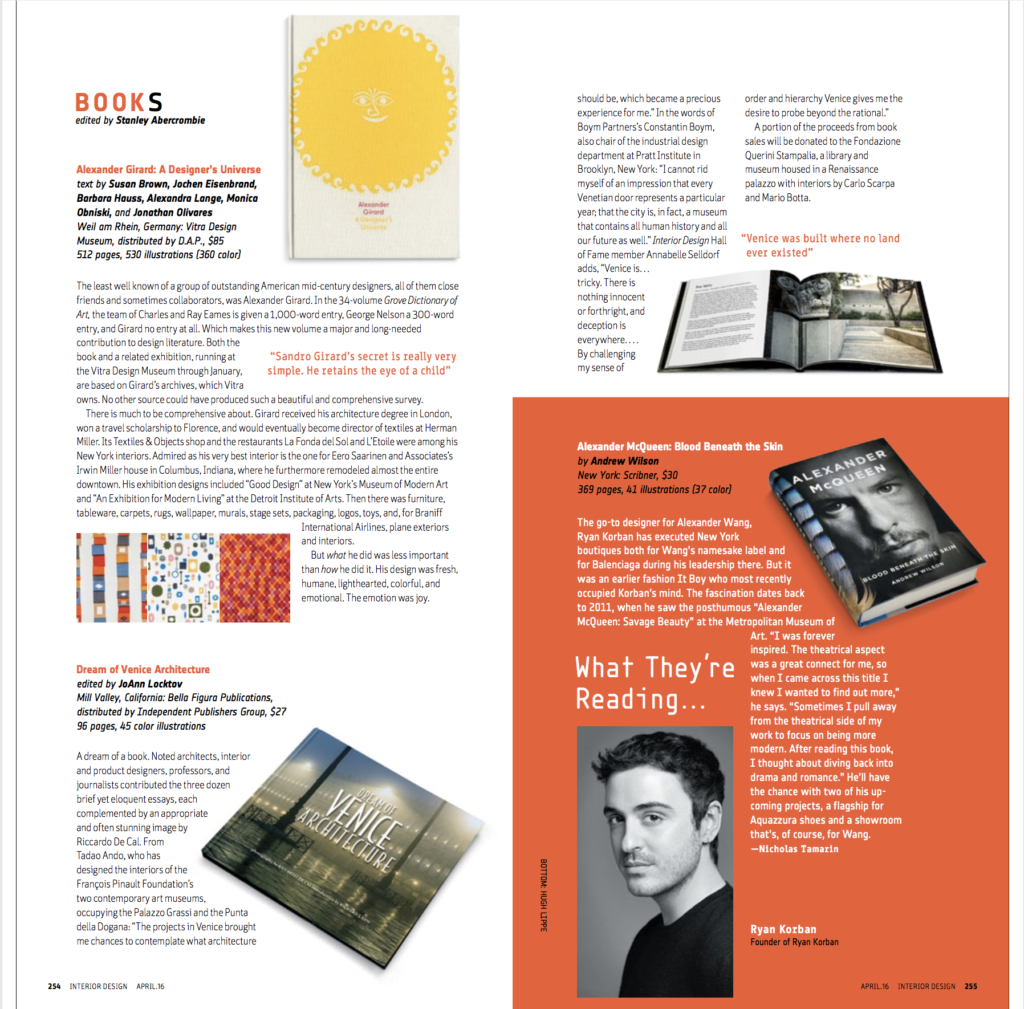 About Dream of Venice Architecture

Dream of Venice Architecture is a journey through the remarkable Venetian urban landscape. A cadre of architects and architectural writers explore the uncharacteristic elements that make Venice unique in the world. Often the first reaction to Venice is one of feeling overwhelmed by the astonishing beauty of her existence. The book, which is available on Amazon,reveals the features of Venice that contribute to incredulity, from the mysterious sotoporteghi to the complexity of Carlo Scarpa’s immaculate detailing. The book includes reveries from architects who have built in the city, been inspired by the city and share in the wonder.

The introduction is by Richard Goy, the international authority on Venetian architecture. He bridges the chasm between the original muddy wilderness of the 5th century and the opulence of the built environment. The dramatic photographs are by the award-winning documentary filmmaker and photographer Riccardo De Cal, who has focused his work on architects, architecture and restorations in the Veneto.  He has exhibited at the Venice Biennale and the Bucharest Biennale, at the Milan Triennale, and film festivals in Lisbon, Cannes and Venice. A portion of the proceeds from each book will be donated to Fondazione Querini Stampalia.