It all started with a DIY project for fashion designer, Karen Thompson. In this article, Tileista, JoAnn Locktov, presents the fashion designer’s story that begins like this: 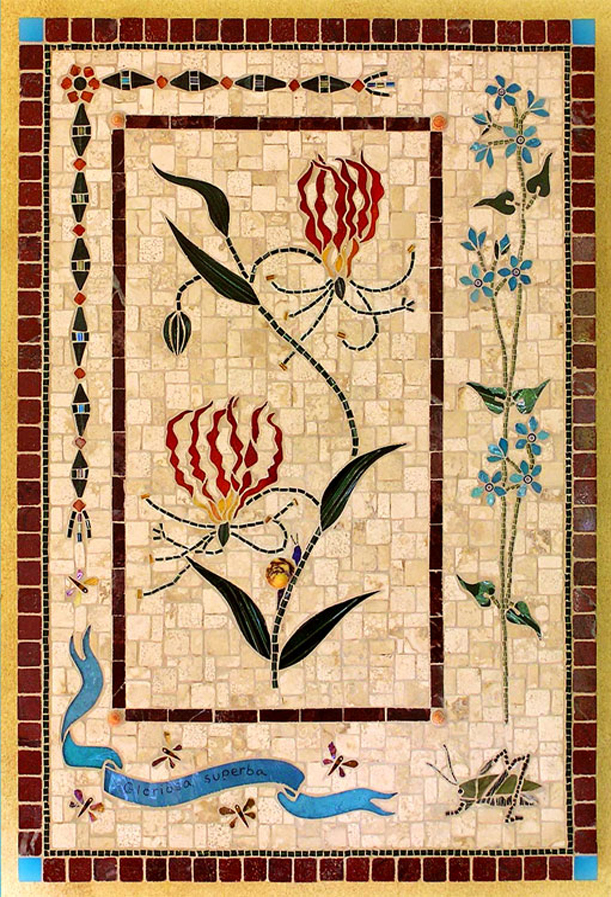 “Be very careful if you decide to embark on a DIY project. It could change your life forever. In 1987, fashion designer Karen Thompson was restoring her home and taught herself the ancient craft of mosaics. It became her career, replacing fabric and buttons with ceramic and glass.

“Working with a vast range of materials Thompson has developed a specialty in custom mosaic installations for both interiors and exteriors. This work has allowed her explore areas that she may not have discovered on her own. A commission to create two intricate wall panels depicting flower filled urns inspired the idea for a series of botanical panels. Thompson says, ‘I needed a unifying template for the panels and I liked the idea of using a traditional illustrated manuscript page. This format allowed me to have a central main species surrounded by smaller flowers, insects and fanciful patterns.’

“Fascinated by the world of flora and fauna, Thompson has built an extensive library, which enables her to research the details of botanical, entomological, and ornithological species. Her many volumes of reproduced florilegia and historical botanical illustration have inspired both realistic and fanciful interpretations of petals and leaves. Thompson says, ‘I tend to favor illustrations over photographs for my research and inspiration. Illustrators articulate and simplify the specific components of their subject and I find this helpful in making decisions about the shapes of my tessera.'”

You can read the rest of the article  “Tileista: Karen Thompson’s Flora and Fauna” on the American Craft Council site. Locktov’s parting shot: “What’s next for Thompson? Her library of ornithology books has increased lately, and we know that could only mean one thing: New bird panels will soon take flight.”