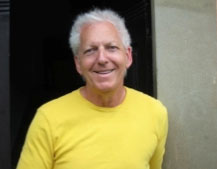 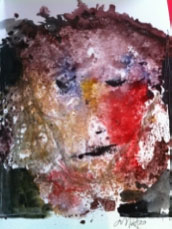 Because You Saw This
Face & Painted It 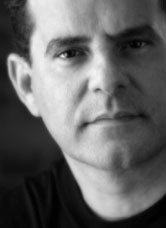 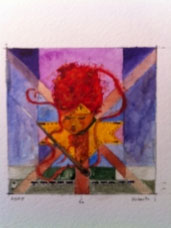 ASAP
Based on the Poem by
Edward Mayes

Because you saw this face and painted it
And not as an afterthought, blue settling on
Water to keep all the relevant boats afloat,
Or when some Ostrogoth thought about
the Pantheon

Excerpt from a Poem Based on the Painting by Alberto Alfonso 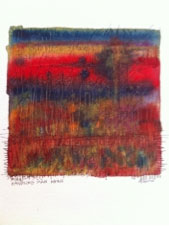 Man Handling Man Aging
Based on the Poem by
Edward Mayes

Tampa, FL……..The Tuscan Sun Festival, held from July 30 – August 7, 2011 in Cortona, Italy will include From Things About to Disappear, I Turn Away in Time, a painting and poetry exhibit. The installation, located at Sant’Agostino is a collaboration between architect/painter Alberto Alfonso, AIA and poet/scholar Edward Mayes. Alfonso and Mayes live both in Italy and America and their collaboration inspires conversations and observations about the concepts of time in each country. The multiple meanings of the Samuel Beckett quote for which the exhibit is titled allude to a faceted sense of past, present and future, a deeply personal connection to time.

The two artists, neighbors in Cortona, practice a daily regime of shared expression. Mayes initiates the process by writing a poem which he sends to Alfonso. A painting emerges as a visual interpretation of each poem. The exception is Because You Saw This Face and Painted It, the singular instance of poem following painting. The exhibit includes a series of 26 intimate watercolors (each 4 x 4 inches) based on the alphabet, and nine oil paintings ranging in size from 20-inches-square to 6 x 16 feet. The 35 poems that accompany the paintings are linguistically acrobatic, reaching towards the roots of etymology. Both paintings and poems resist the literal in favor of imaginative truth. The project allows both Alfonso and Mayes to range freely among their passions for Italian art, religious questions and intense quotidian life.

Cuban born Alberto Alfonso is a founding principal and President of Alfonso Architects, an award winning 35 member architecture firm located in Ybor City, Florida. He has recently been appointed the Interim Program Director of Architecture and Design at the USF Polytechnic. Alfonso has exhibited his paintings in the US and Italy and they are permanently installed in the Nielsen Media Global Technology Center, the Mission of St. Mary Chapel and Carmel CafeÌ.

The Tuscan Sun Festival, now in its 9th year, brings together a prestigious lineup of artists from the worlds of classical music, dance, visual arts and Hollywood, in a unique celebration of Art and the Tuscan lifestyle.