Sara Baldwin of New Ravenna is featured in a piece in Vogue magazine called “Drawing Board” with the subtext: “A Trio of Designers Looks to the Past to Create Something New” on the “People Are Talking about Design” page. The piece is by Mieke Ten Have. 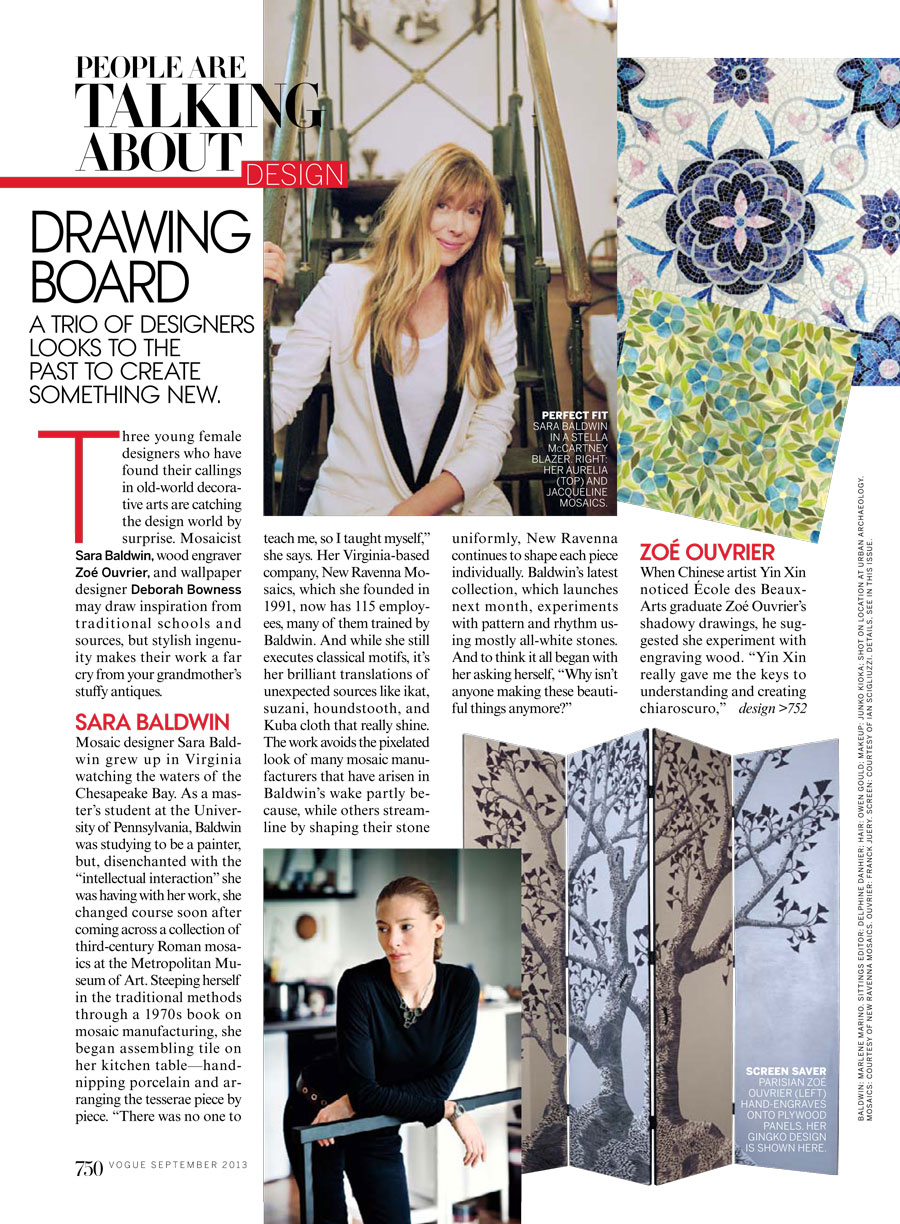 A bit more about Sara from her profile:

Sara Baldwin grew up on Virginia’s rustic Eastern Shore, on her family’s farm. “We were surrounded by nature, and all the inspiration that nature creates, from childhood, and we were encouraged to express ourselves artistically, using whatever we could find in our environment. It was an idyllic upbringing, certainly for an artist. We had to be both respectful of, and resourceful with, our surroundings, and these principles have guided me throughout my years as a designer and a businessperson. I feel very lucky to have roots and to live in a place where beauty and inspiration seem inexhaustible.”

In 1984, Baldwin set out to study fine arts at the University of Pennsylvania, where she took her Bachelor’s and Master’s degrees, and trained rigorously as a fine arts painter. It was here that she made her first mosaic design, a mural of Eve in the Garden of Eden. When she returned to the Eastern Shore in 1990, the thought of a mosaic company called New Ravenna seemed a pipe dream. She took a chance and launched the small cottage industry with a handful of artisans. Twenty years later, New Ravenna employs more than 130 people and spans three city blocks in historic Exmore, Virginia–and leads the nation in designing and manufacturing custom mosaics in stone and glass with materials imported from across Eurasia and the Americas. She also started Sara Baldwin Design, which specializes in edited collections of product designs.

“It is our constant thrill to be on the cutting edge of design, using both traditional stone-cutting and mosaic methods and modern ones, such as the use of water-jet saws, which have brought us into a new era of stone and glass mosaic. I work with a great team of designers who never cease to amaze me; their love of the craft, and their resourcefulness are in perfect harmony with my own. ”

Baldwin, who still lives on the Eastern Shore, is proud parent to Michael, 23, and Grace, 17, and stays close to the family and land that have brought her so much. She is the founder of New Ravenna.

Previous Post: « clé Introduces Designer Tile Cases for Your iPhone
Next Post: The Measure of a Man, Carlo Scarpa by Robert McCarter »