The New York Times features Deborah Osborn in a roundup of tiles titled “Tiles Soaking Up the Local Color.” The editors note, “Deborah Osburn began making colorful tiles to brighten up a mostly beige-dominated industry nearly 30 years ago. And though in recent years she has been selling other artists’ designs, she has returned to her creative roots with the Watermark Collection for Clé, her artisan tile company. Inspired by Japanese techniques, she produced the ombré-stained tiles by placing unglazed porcelain into a cup of indigo and waiting for the dye to be absorbed. “I watched every day to see what it would do,” she said of the initial experiment. “At first it was dark and intense, then it began to fade. I remember pulling it out and thinking it was the most beautiful, natural, crazy tile we’d ever created.” The tiles come in indigo or gold verdigris in three sizes and four styles: dip, wash, stroke and stain. They range from $59 to $68 a square foot. Information: cletile.com.” The piece, which appeared in the Times’ highly popular “Currents” section was written by LORI HOLCOMB-HOLLAND. 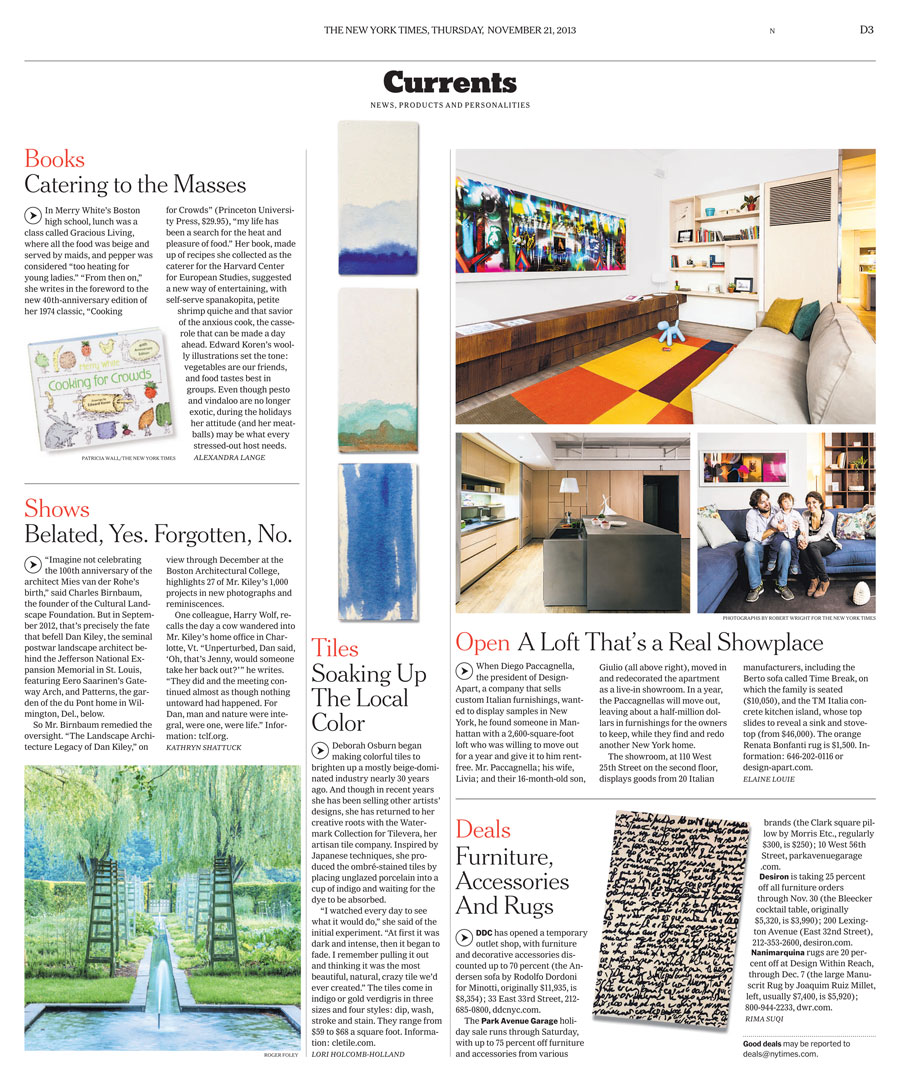 All of the Times “Currents” column pieces are located in one place on the paper’s website. You can read the talented design reporters with the paper by following links that discuss subjects such as “Cold Wind Can Take A Back Seat” and “Not a Banister Was Changed,” in which writer Julie Lasky covers the New York City Landmarks Preservation Law that was enacted to ensure that important buildings survived the whims, greed or cultural indifference of developers and city officials. Among the 31,000 properties designated as landmarks, only 117 are interiors…” She cites  City Hall and the New Amsterdam Theater as two. ” This small fraction gets special treatment in “Rescued, Restored, Reimagined: New York’s Landmark Interiors,” a show opening on Friday at the New York School of Interior Design.” You can see more of her story by clicking on the title of the article above.