The New York Times features clé tiles in a January 2013 feature titled “Tile Echoes of an Ancient Civilization.” The collection featured is by Forrest Lesch-Middelton, a potter in Petaluma, Calif., who “makes ceramics that look like the products of an ancient civilization whose people proudly insisted on being buried with their dishware.

“The surfaces are mottled, the decorations irregular and the tones earthy siennas and fawns, Mr. Lesch-Middelton invented a technique for transferring Islamic starbursts, scrolls and flowers to the surfaces of his pots while they are still on the wheel, requiring him to shape the vessels from the inside. (He began this work in 2003, the year the United States invaded Iraq, saying he wanted to show off the artistic heritage of a culture he believed was misunderstood.)

“Lately, he has adapted the look to tiles. Origins, his first collection for the tile company Clé, includes seven repeating patterns in three sizes. prices range from $7.50 for a 3-inch unornamented square to $28.50 for a 6-inch square with pattern.” The piece was written by JULIE LASKY. 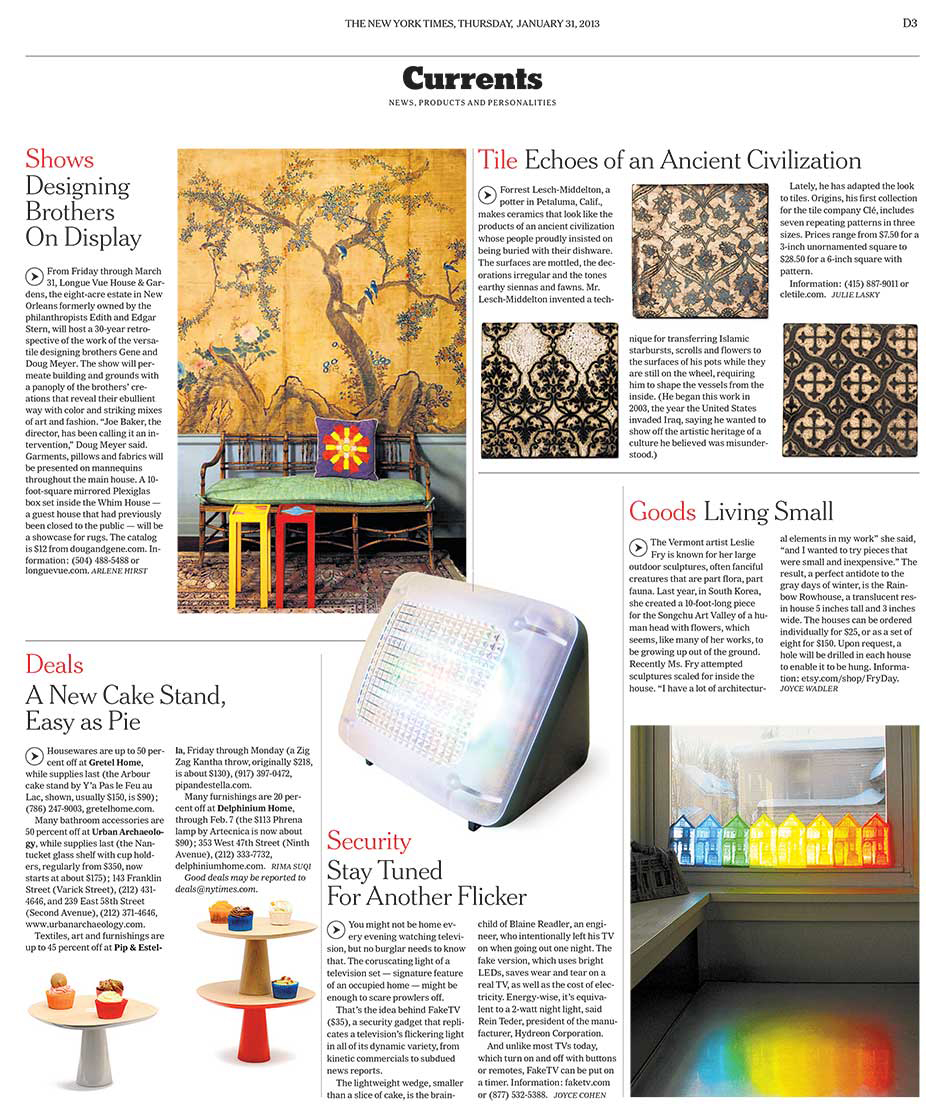 The tiles featured are from the new Origins Collection of ceramic tile by Forrest Lesch-Middelton. A potter in Petaluma, California, Lesch-Middelton brings together a number of firing, forming and silk-screening techniques to create the complex designs and surfaces of his tile. Inspiration for the Origins Collection comes from the sacred geometry and arabesque designs found in the Middle East, North Africa and Europe. Each tile is hand made individually, and can be installed indoors and out on floors and walls. There are seven tile designs and they each come in three sizes: 3, 4 and 6 inches square. There is also unadorned field tile to compliment the patterned tiles.

The tonal sepia tiles have a historic patina. Deborah Osburn, founder and creative director of c l é compares them to the “soulful shards found on an archaeological dig.” The tiles on c l é are as distinct as the artists who create them. It is Osburn’s goal to provide a forum for discovery and conversation about what she loves most, tiles created by impassioned artists creating remarkable surfaces.

Other tiles by c l é have been featured in The New York Times and other noteworthy publications.